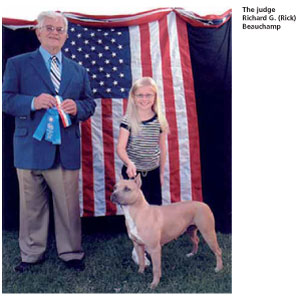 Soundness or type: which is more important? By Richard G. (Rick) Beauchamp

Soundness or type: which is more important?
By Richard G. (Rick) Beauchamp

It seems the question, “Which is more important,soundness or type?” is one answered periodically and pretty conclusively, only to beraised time and time again. We can understand the why of the question – getting one or the other is far easier to come by than finding both to an acceptable degree in the same animal. A typical example of lack of understanding can be seen in a letter I received from some one who had judged a very large entry at a breed specialty match. The writer spoke of “abitch in one of the classes that was plain, not very typey, and she never put a foot wrong. ”It appears the writer was somewhat taken by this particular bitch and eventually puther first in the class over asignificantly typier but less sound competitor. This, despite the fact that “comments and opinions of those standing by were adamant on type over soundness.” It is difficult to make valid comments on the class the writer referred to in that we would really have to actually see the individuals she was referring to. So much depend supon what all the dogs in the class looked like on the day –how lacking in type the bitchi n question was and to what degree the typey ones were unsound.